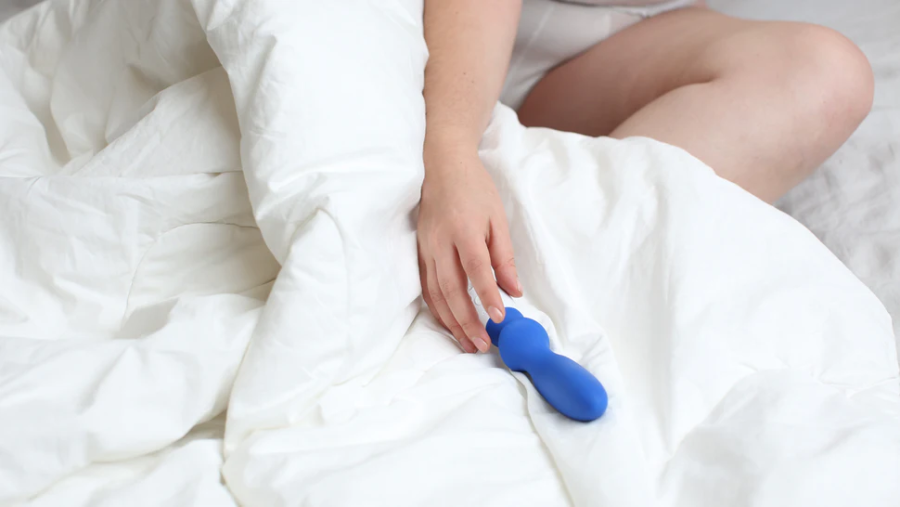 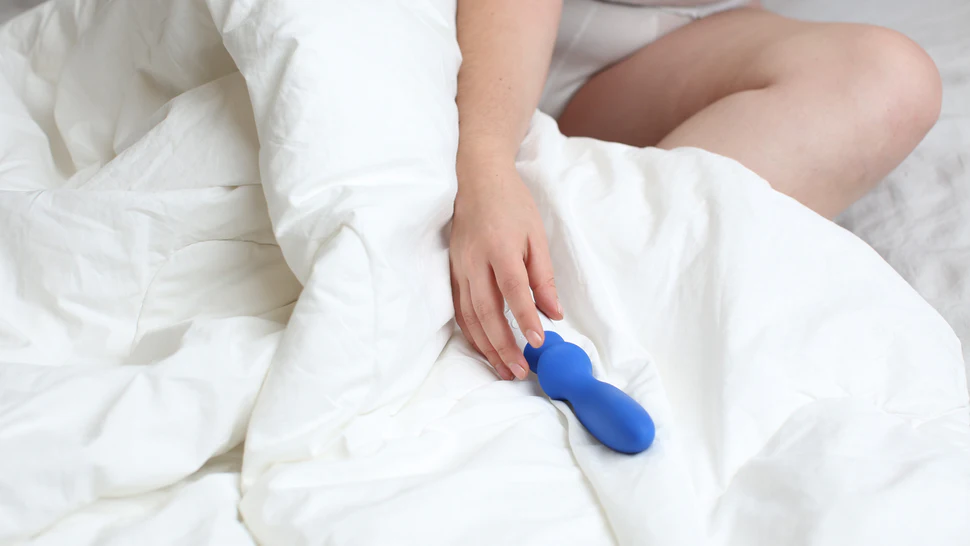 I rushed to the register to check out, and while there, debated the entire time whether to make eye contact with the cashier (which makes me look more “casual” about this transaction?). I might or might not have jerkily made and broke eye contact multiple times. I’m pretty sure he looked bored. I rushed out of the store as quickly as possible.

I thought that garnering the courage to buy it would be the hard part, but I was wrong. Using the damn thing was a whole ‘nother ordeal. After destroying and disposing of the packaging in a way that I’m pretty sure no one would never identify what it once housed — maybe they’d think the little pieces of the packaging were the start of a serial killer letter instead, which would be ok — I had to find batteries for it (they required weird ones, not your common AA or AAA batteries), so I had to dig deep in my parent’s utility closet until I could find something.

Batteries in place, I turned it on… Looking back, that thing barely even vibrated. It was your standard plastic vibrating stick that was cheaply built (I think I bought it for roughly $20). It didn’t do a damn thing for me. I remember even trying to use it as a dildo, and the size and the plastic feeling felt alien and so, so uncomfortable in a very bad way. The cheapness made it feel strangely violating. I couldn’t use it again. I hid it inside the back of my drawer until I found an opportunity to dispose of it somewhere my family would never find it. (Dexter’s got nothing on teenage girls buying sex toys)

Mine was more yellow than green, but you get the idea. The glowing was kinda cool though.

My experience was pretty abysmal. But I was pretty determined to find something that’d work for me since I heard so many good things about vibrators online, so I kept trying different things through college and onward, learning about the different types of products out there until I found stuff that I liked.

After all, trying anything sexually for the first time can be all sorts of awkward and uncomfortable. I’ve yet to encounter an (honest) first sexual encounter story that is anything but that.

I don’t think my first experience is that uncommon, and for those of you who are nervous or didn’t have a great first experience either, I’d say don’t let that be indicative of what it might be going forward. There’s a lot we don’t know when we first get into something (sex stuff and beyond), and I’m going to go over some things that might help you should you go out and find something new in the future.

I wish I could underline that ten times. Don’t cut corners on your sex toys. Not only are many of them designed to sell in large quantities like at a Spencer’s (designed to sell, not to use), many of those toys are also made with pretty low-quality materials to optimize for every nickel and dime of profit. And if they made things with low-quality materials, you know they cut corners elsewhere, too. I’ve opened up enough vibrators that have weird pieces of tape/shoddy wires/all sorts of things that you wouldn’t see in even most other consumer electronics. Some were downright dangerous.

Don’t put bad things in there

Why do materials matter?

Well, if you’re planning on using your toy vaginally or anally, that part of your body is far better at absorbing materials than the rest of your skin. Chemicals can jump into the bloodstream without metabolizing (versus if you were to ingest something orally). Mucus membranes are great for that.

So, those cheap rubber/plastic toys? A lot of them have phthalates, parabens, and other shit that you don’t want circulating in your body. You may not feel immediate effects, but like smoking or other things that aren’t great for you, it might not seem THAT bad right now, but they could compound over time and be a bigger problem for you later. If that’s not convincing to you, I’ve had a number of vibrators of varying price points literally melt in room temperature. Yeah, that’s going into your body. Get something that’s not shitty for yourself.

It feels and acts as low-quality as it is

So if you want to invest in your pleasure, get something that’s built well. With something as simple as a standard vibrator, there are a bunch of great companies at a wide range of price points these days. Get something with a brand that’s been around for a little while or prides themselves on being transparent about the materials they use for their products. Don’t get something that looks like it’s coming direct from a questionably named manufacturer that looks like it could disappear overnight, since they’re less likely to care about materials and their brand’s long-term reputation and more about simply moving dollars and units.

3. Lube is your friend

If lube isn’t already your friend, introduce yourself to a few great lubricants now. A good sex lubricant is not only a way to mechanically make it easier to use sex toys, it also helps you feel more comfortable and can help you have awesome sex by yourself and with a partner, too.

It kind of sucks when you’re feeling dry and are trying to use something that feels like it’s chafing at you. Then that discomfort causes you to lose interest, get distracted… and it becomes an unsexy cycle that can leave you empty-handed (and frustrated).

4. Vibration (or whatever method of stimulation you choose) matters a lot

For vibrators, you might have heard about vibrators that are more “rumbly” versus “buzzy”. What many people are describing here is that certain vibrators have higher frequencies than others, which feels less “substantial” and more “fluttery.”

While one certainly sounds like it should be better — and the majority of people do prefer “rumbly” — there are some people who prefer buzzier vibrations, which is fine. On certain corners of the internet, you have some who proselytize the gospel of rumble but there isn’t any right or wrong way to prefer your stimulation if you like weaker sensations.

Just know what you’d like and that it’s a factor to keep in mind.

It’s not uncommon to add different toys and sensations, especially if you have a collection of toys and are looking to craft a certain experience. It does require a few extra steps though, which is why I generally recommend going for something on the stronger end since you can fix that on the spot more easily.

5. Try your toy at least a few times

As long as the experience wasn’t awful like my first time was, I recommend trying a new toy at least a few times, in a few different ways, before you determine whether you like it or not. As said previously, the first time trying anything might be a little awkward or confusing, especially if it’s something you’re very new to.

Your mindset (stress/what you ate/imbibed that day/etc) can greatly influence how you’re feeling about anything, as well as obvious things like how turned on you were. Some days (or weeks!) you might not be feeling good at all, and your orgasms might feel lackluster for a time. It’s not always the sex toy, there are a lot of things that go into a good experience.

So if you’re able and willing, try it a couple of times over a period of time. Try moving your toy more or less, or using different angles and motions. Try it when you’re feeling relaxed. Try it with a partner. Heck, even try a few stimulants like coffee, alcohol,or even cannabis if you’ve found that helps you get in the mood.

Experiment a bit, since if nothing else, getting a sex toy is part of a broader experience of exploring yourself. Even if you encounter something that doesn’t work for you, you can at least learn something about yourself from the experience that you can apply to future encounters.

Bonus tip: If something doesn’t work for you, there is nothing wrong with you

This may go without saying, but I have heard from some people who feel like they are broken if something doesn’t work for them, especially if they’ve heard crazy positive things about a product from somebody else. If that is the case, there is nothing wrong with you. You are not broken. Everyone’s preferences are so different and there will never be one thing that everyone will like, so it’s a matter of finding what you like.

Complicating this all even more, as I mentioned previously, it’s hard to know what you like when first starting out. Even worse, your preferences actually change over time. They did for me over my nearly 20 years of experimenting with this stuff.

Consider the experience of trying a sex toy an exploration into the unknown: kind of unexpected, maybe a little bit scary or nerve-wracking, but potentially exciting and thrilling. Regardless of whether you have a mindblowing orgasm or super pleasurable experience (or not), you’ll know more about yourself than you did before, and you’ll be closer and closer to being in touch with yourself and what’s pleasurable for you. That’s all you should care about. Not the latest “it” toy with whatever reputation it has.

Now that I’ve shared some of my learnings, it’s your turn to find a sex toy that’s great for you. Have fun, enjoy the highs, reflect and laugh at failures, and most importantly: enjoy your journey.