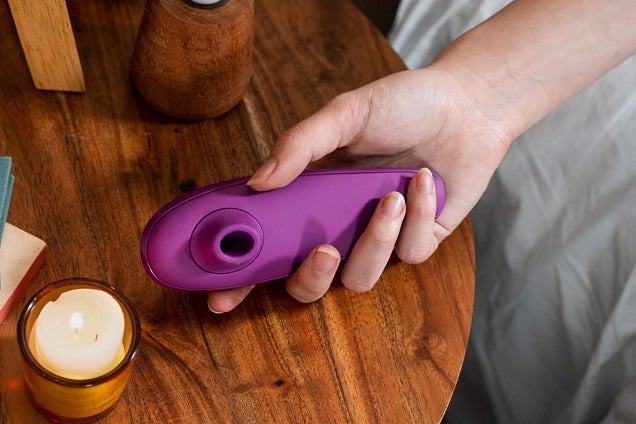 If you look through a sex toy site you might find a number of toys that look like something out of science fiction movies. These are typically described as air pressure or suction vibrators, and their descriptions tout their ability to mimic oral sex.

These toys can look kind of intimidating since they’re not what we’re used to. But there’s a reason that these vibrators get rave reviews.

They provide intense and even multiple orgasms at times, stimulating the nearly 8,000 nerve endings in the clitoris.

What Do Clit Suction Vibrators Do?

These toys use a “suction cup” that encloses around the clitoris and stimulates it via air pressure waves. That isn’t to say that it provides intense suction, but rather it mimics the feeling of oral sex.

To get very technical, CNET’s case study on one brand says that once the silicone head encircles the clit, “…there is a constant change between vacuum and overpressure, which helps blood circulation.”

The design of these toys means that orgasms are typically described as “touch-free.” This part of the design allows for multiple orgasms since your anatomy won’t get used to one specific feeling.

What Toys Are Out There?

The first is the original Womanizer brand. (Yes, the name is unfortunate.) They patented their air pleasure technology and became a leader in this  type of adult toy.

While their original models are no longer available, they continue to innovate. With recent additions, such as Womanizer Clitoral Suction Stimulator Using patented Pleasure Air Technology, the clitoral stimulator's pressure waves gently suck the clitoris to deliver a superb new orgasmic sensation.

Others that have come out include  the Satisfyer brand . The model you hear about most, The Satisfyer Pro 2, has 11 intensity levels at a lower price point.

There’s no denying that air pressure or suction toy is a remarkably different sensation, so your body will respond differently.

When you go through the reviews on product pages, you’ll see claims about how quickly air pressure toys have made them come. This is because this sex stimulates a clitoris completely different than a typical clit vibe.

One Satisfyer Pro 2 review described the orgasms this way: “The orgasms feel different—as if they’re starting deeper down. And unlike with a lot of other sex toys, once you feel yourself getting close, you go over the edge immediately rather than building up gradually.”

Should I Try One?

While quick and intense orgasms can be great, they aren’t for everyone. At the same time, the functionality of some air pressure vibrators leaves room for users to experiment and find an ideal intensity for them.

Other things to keep in mind include that not everyone will experience vibrators the same way, a particular brand’s technology might not work for you, or you may find you don’t like the feeling.

At the end of the day, pleasure means different things to different people, but if you want to try something different and you’re tired of the vibration, then an air pressure sex toy may be right for you.